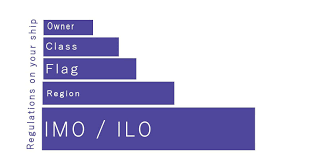 ‘A remorseless and never ending escalation in time and paperwork’

The most obvious, and reported comment on the effect of Regulation on the Human Element is the massive increase in on-board administration, resulting in a remorseless and never ending escalation in time and resource-consuming paperwork and record keeping.

The master and chief engineer are now ship managers and administrators, who are spending far too much time completing paperwork and administrative tasks to satisfy the avalanche of legislation and regulations that have fallen on them in the past decade. This detracts from the time they should be spending with the officers and ratings, and getting out and about the ship and engine room.

The ‘human’ element is being lost because of this isolation of the master and chief engineer from the hands-on running of the ship, in that they get less and less time to mix with, talk to and generally get to know their officers and ratings. There is a very real danger that the officers will
view the master or the chief engineer as someone who just visits the bridge or engine room occasionally.

I am guilty of this during periods of heavy administrative work, and I have to make a conscious and deliberate effort to break off and visit the bridge and chat to the duty officer at least once during each watch. You can lose touch with what is going on around you if you don’t. This is particularly important on a vessel where the officers are always changing, so that you have to get to know them, and their capabilities and limitations, in a short space of time. Ignore this at your peril
– otherwise your chances of forming a close-knit and successful bridge team will be greatly diminished!

It seems that so much Regulation has been dumped on the ship without consultation, on the assumption that we will absorb it all and just get on with it, as we have always done. The Human Element seems to be conspicuous by it’s absence when it comes to Owners, Government, Administrations or the IMO seeking opinion on any aspect of the volumes of regulations that have
been heaped on our heads; and yet we, as shipboard managers and administrators, have to use our considerable human resource talents and skills to make sure that the whole lot is complied with.

One of the most recent examples of Regulation that has been overwhelmingly negative from a Human Element perspective has been the introduction of the ISPS Code, which has resulted in
a huge increase in denial of shore leave. The same Code has ensured that in a lot of cases, officers and crew cannot take shore leave anyway because watches have had to be doubled to comply with certain elements of the Code, such as gangway security and deck patrols.

Furthermore, the social life on board a busy commercial vessel has gone out of the window, with smaller and smaller crews, shorter turn-round times, and the fact that bulk carrier, tanker and
modern container terminals are by their very nature situated far from population centres, making us virtual prisoners by their very isolation. There is, however, a positive note to all of this, which maybe has resulted in safer ships and a safer working environment: all the humans in the chain have had to meet, discuss, plan, organise and otherwise interact with each other to make sure that
all the Regulations have been complied with. This has of course been achieved at the expense of greatly increased workloads for everyone on board.