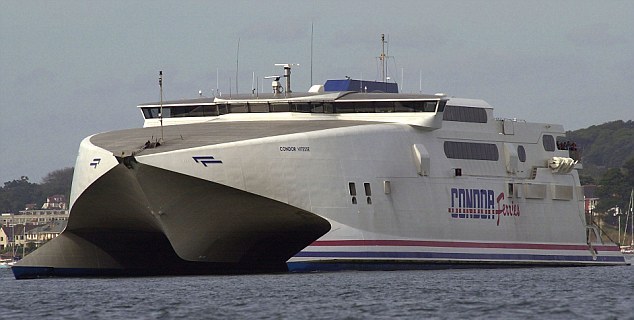 Nils had been proud to be appointed senior master of such a smart and impressive ship. She was one of the largest high-speed catamarans ever built, designed to maximise both passenger comfort and freight capacity and fitted with ‘state of the art’ instrumentation. Capable of speeds in excess of 40 knots, she’d instantly become the company’s flagship, pictured on the front of brochures and given rave reviews in the transport press. It was fitting that he, as the longest serving master, with a completely unblemished career, be given the task to introduce her onto her new route.

At first Nils had enjoyed the challenge of overcoming the vessel’s handling idiosyncrasies. The sense of power at his fingertips was inspiring and he was always thrilled by the sudden acceleration as he pushed the joystick forward and by the accompanying throaty roar as the diesels cranked up. She performed well at sea and, with a permit to operate in wave heights up to 3.5 metres, she was rarely beaten by the conditions. Her relatively small pod-like bridge was positioned centrally, perched high on top of the passenger accommodation. From there he had a 360-degree view although, with the lack of any bridge wings, the sides and stern of the vessel were out of sight.

The designers had counteracted this lack of direct view with seven controllable CCTV cameras. It was taking time for Nils to become proficient in their use. He found it difficult to accurately interpret angle and distance from the pictures and, furthermore, the numerous screens partially obscured the direct view aft needed as he manoeuvred the vessel astern towards the linkspan.

The ship had been in service for three months when, with summer turning to autumn, the first equinoctial gale of the season disrupted the service. The vessel had spent the day stern-to her linkspan with her port side alongside the dolphins as the gale raged outside. In the afternoon, a message was received that the vessel had to shift to an adjacent berth. The movement commenced at 1600 with Nils and the chief officer on the bridge and mooring parties stationed forward and aft. Nils stood by the aft facing controls and ordered the head line to be let go. The chief officer, whose role was communications, passed the order on.

The wind in the harbour had picked up to about 30 knots although Nils, cocooned and insulated in the bridge, was unaware of this. The only wind speed indicator was positioned at the forward console. The forward mooring team and the adjacent quayside were not visible from the aft control console. The bow was caught by the wind and Nils was unaware that the crew had had problems letting go the head line. With the bow drifting rapidly away from the dolphins, Nils ordered the stern line to be let go as he used the waterjets to try to manoeuvre the vessel into a position nearly parallel to the berth and head into wind. By this time, however, with the wind firmly on the port bow, he was unable to stop the starboard swing.

Nils became disorientated, the CCTV screens were only a distraction and the bow swung across the basin and struck the end of an adjacent finger jetty, holing the vessel beneath the waterline and flooding a void space. Then, broadside onto the wind, she was blown down onto another moored vessel before a temporary lull allowed Nils to regain control and bring the vessel into the centre of the basin. A tug was connected and the vessel was subsequently brought alongside her destination berth without further incident.