How does a magnetic compass work?

A magnetic compass works because the Earth is like a giant magnet, surrounded by a huge magnetic field. The Earth has two magnetic poles which lie near the North and South poles. The magnetic field of the Earth causes a magnetized ‘needle’ of iron or steel to swing into a north-south position if it is hung from a thread, or if it is stuck through a straw or piece of wood floating in a bowl of water. 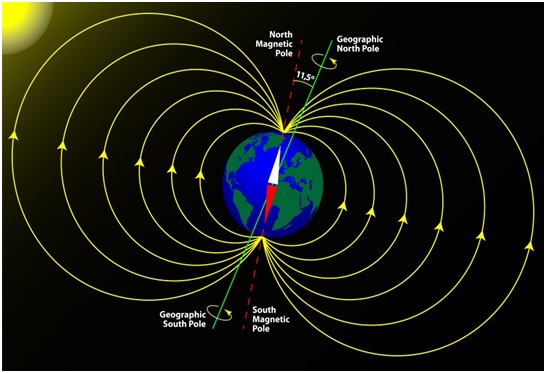 A compass works by utilizing the Earth’s magnetism in order to find directions. Its invention enabled people to perform navigation over long distances, opening up the sea for exploration
A compass points north because all magnets have two poles , a north pole and a south pole, and the north pole of one magnet is attracted to the south pole of another magnet.

How accurate is the magnetic compass?

As long ago as the 15th century, mariners noticed that the needle of a magnetic compass does not point accurately to Earth’s true north. Columbus, for instance was aware of this on his voyages across the Atlantic in the 1490s. Instead, the needle makes an angle with true north, and that angle varies from place to place on the Earth’s surface. This means that there is a different magnetic variation for different places on Earth. These variations were investigated on a famous 17th century voyage by the great scientist and astronomer Edmond Halley. It was thought at this time that the longitude of a ship could be found by the compass variation, but this proved to be untrue.