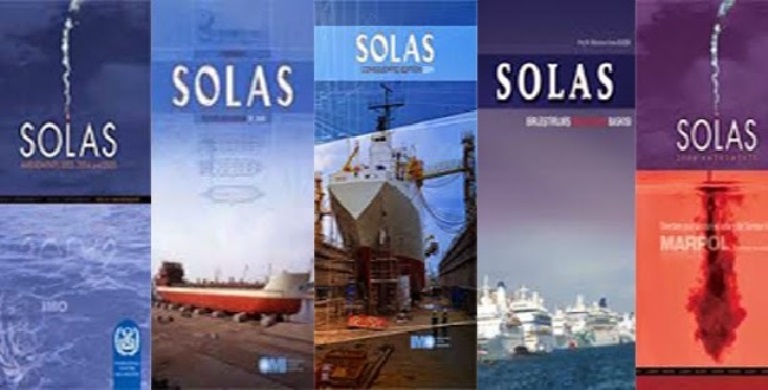 The International Convention for the Safety of Life at Sea (SOLAS) is an international maritime safety treaty. The SOLAS Convention in its successive forms is generally regarded as the most important of all international treaties concerning the safety of merchant ships.

The first version of the treaty was passed in 1914 in response to the sinking of the RMS Titanic. It prescribed numbers of lifeboats and other emergency equipment along with safety procedures, including continuous radio watches.

Chapters of SOLAS are :

Chapter I:  A  General Provisions

Surveying the various types of ships and certifying that they meet the requirements of the convention.

Chapter II-1: A Construction A Subdivision and stability, machinery and electrical installations.

The subdivision of passenger ships into watertight compartments so that after damage to its hull, a vessel will Remain afloat and stable.

Fire safety provisions for all ships with detailed measures for passenger ships, cargo ships and tankers.

Life-saving appliances and arrangements, including requirements for life boats, rescue boats and life jackets according to type of ship.

Chapter V: A Safety of navigation.

This chapter requires governments to ensure that all vessels are sufficiently and efficiently manned from a safety point of view. It places requirements on all vessels regarding voyage and passage planning, expecting a careful assessment of any proposed voyages by all who put to sea. Every mariner must take account of all potential dangers to navigation, weather forecasts, tidal predictions, the competence of the crew, and all other relevant factors. It also adds an obligation for all vessels’ masters to offer assistance to those in distress and controls the use of lifesaving signals with specific requirements regarding danger and distress messages. It is different to the other chapters, which apply to certain classes of commercial shipping, in that these requirements apply to all vessels and their crews, including yachts and private craft, on all voyages and trips including local ones.

Chapter VI: A Carriage of Cargoes.

Requirements for the stowage and securing of all types of cargo and cargo containers except liquids and gases in bulk.

Requires the carriage of all kinds of dangerous goods to be in compliance with the International Maritime Dangerous Goods Code (IMDG Code).

Nuclear powered ships are required, particularly concerning radiation hazards, to conform to the Code of Safety for Nuclear Merchant Ships.

Chapter IX: A Management for the Safe Operation of Ships

International Convention for the Safety of Life at Sea  Requires every shipowner and any person or company that has assumed responsibility for a ship to comply with the International Safety Management (ISM) Code.

Includes the International Ship and Port Facility Security Code (ISPS Code). Confirms that the role of the Master in maintaining the security of the ship is not, and cannot be, constrained by the Company, the charterer or any other person. Port facilities must carry out security assessments and develop, implement and review port facility security plans. Controls the delay, detention, restriction, or expulsion of a ship from a port. Requires that ships must have a ship security alert system, as well as detailing other measures and requirements.

Specific structural requirements for bulk carriers over 150 metres in length.