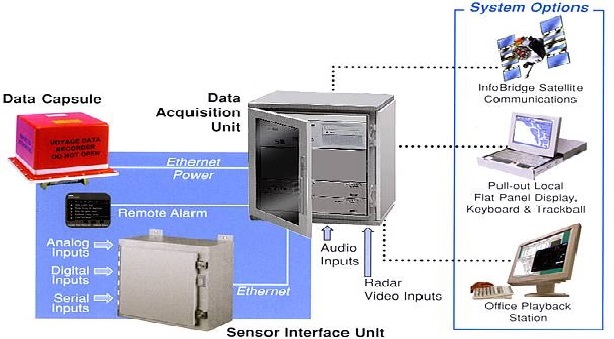 Voyage data recorder, or VDR, sometimes also called Black box of the ship is a data recording system designed for all vessels required to comply with the IMO‘s International Convention SOLAS Requirements (IMO Res.A.861(20)) in order to collect data from various sensors on board the vessel. It then digitizes, compresses and stores this information in an externally mounted protective storage unit. The protective storage unit is a tamper-proof unit designed to withstand the extreme shock, impact, pressure and heat, which could be associated with a marine incident (fire, explosion, collision, sinking, etc.).

The protective storage unit may be in a retrievable fixed unit or free float unit (or combined with EPIRB) when the ship sinks in a marine accident The last 12 hours of stored data in the protected unit can be recovered and replayed by the authorities or ship owners for incident investigation. Besides the protective storage unit, the VDR system may consist of a recording control unit and a data acquisition unit, which are connected to various equipment and sensors on board a ship.

Although the primary purpose of the VDR is for accident investigation after the fact, there can be other uses of recorded data for preventive maintenance, performance efficiency monitoring, heavy weather damage analysis, accident avoidance and training purposes to improve safety and reduce running costs.

Referenced to UTC with an indication of the source. The source could be the GPS .

In latitude and longitude with the datum used. The source could be the GPS .

Through water or speed over ground with indication of which it is. The source could be the speed log.

As indicated by the ship’s compass. The source could be the gyro compass.

As picked up by one or more microphones positioned on the bridge so that conversation at or near the conning stations, radar displays, chart tables, etc., is adequately recorded. As far as practicable, the positioning of microphones should also capture intercom, public address systems and audible alarms on the bridge

Relating to ship operations should be recorded