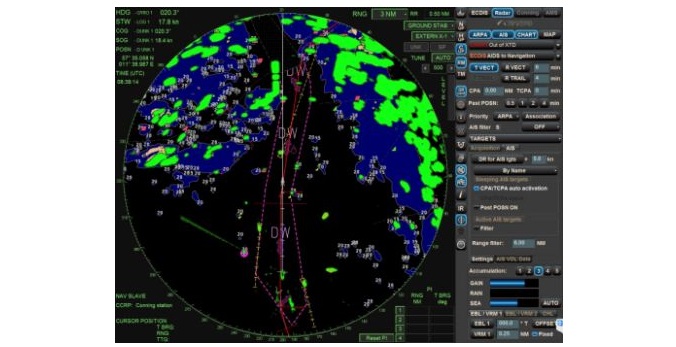 Radar is an object-detection system designed for detecting and tracking objects (targets) at considerable distances.The word radar is an acronym derived from the phrase  Radio Detection  And Ranging.

Radars transmit directional microwave radio pulses with a rotating ariel (the scanner) in a 360º circle around the machine. It detects the bearing and range of echoing pulse returns from significant surrounding targets to produce a map like display.

Considerable power is required by a radar for transmit mode, of up to 400 watts even in the smaller sets. The supply is usually a small solid state power pack or motor alternator or a generator with larger sets.

Super high frequencies of electromagnetic energy waves (3000 to 10000 MHz, these are wavelengths of 10 and 3 cm, respectively) are produced in the oscillator. The operating cycle of the oscillator is initiated by the trigger, which determines the pulse repetition frequency (PRF). The pulses are shaped in the modulator, which determines the pulse length, then passed to the magnetron, which converts the energy into radio waves and determines the radar frequency. They are then passed to the transmitter, which in modern radars is usually combined with the receiver (the transceiver). The transceiver is usually located within the scanner unit.