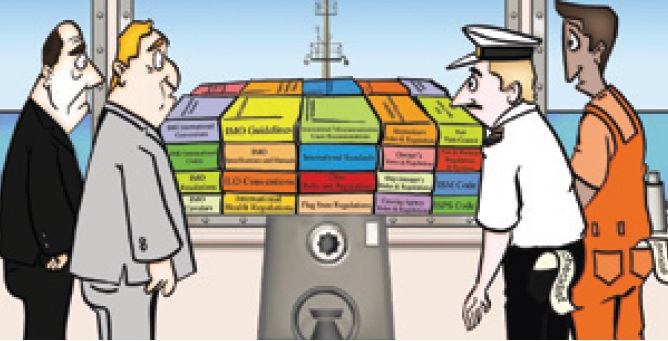 Headlines such as ‘Vessels collide as master falls asleep’ do not raise too many eyebrows in the shipping world today. This and lesser incidents are not for want of regulation. Doug Stevenson of the Center for Seafarers’ Rights suggests, “Maritime safety regulations have become so refined that the highest risks to safe waterborne commerce are not the ships themselves but the humans that operate them. Nevertheless, safety regulations still largely focus on technical solutions rather than the human element.”

There is a view that regulations can be discarded, or records falsified so that hours of rest and safe minimum manning levels can be overlooked, as commercial pressures predominate over concern for the wellbeing of the crew. There are many ships that both implement regulations and take into consideration the extra demands that regulation places on the crew. But, there still exist unscrupulous agents and owners and port authorities whose disregard or misinterpretation of regulations can subject seafarers to a formidable struggle for survival.

This approach is far-removed from the concept of an ethically responsible implementation of regulations capable of treating seafarers as stakeholders and not as passive instruments. There can be little doubt of the need for the provisions in the Consolidated Maritime Labour Convention that will place the wellbeing of seafarers firmly within the context of the regulatory framework. But, regulation in itself is not the problem; rather, difficulties arise from the lack of effective proper direction given to it, often due to commercial pressures, which in the long run may not even make commercial sense.

Perhaps with guidance from the international community and adequate regulation on the part of the worldwide political establishment, the lot of seafarers and the image of shipping will eventually be improved.