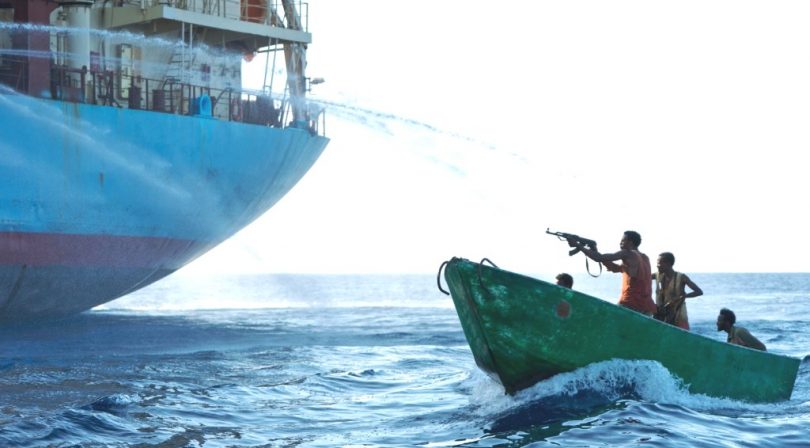 Pirates have attacked the Liberian-flagged 4,360 TEU CMA CGM Turquoise, kidnapping two crew members off the coast of Nigeria, with the remainder of the crew said to be safe.

Turquoise, managed by Dioryx Maritime Corp. in Greece, was stormed late on Monday as it travelled between Nigeria’s commercial hub Lagos and Douala in Cameroon.
According to Ghana-based anti-piracy agency Maritime Trade Information Sharing Centre (MTISC-GOG), the ship  was boarded in waters about 30 nm off the coast of the Niger Delta. The captain activated the SSAS and the crew retreated to the citadel, but two were captured and kidnapped before they could enter.
“This attack — like most others off the Niger Delta — was carried out at night and carried an element of surprise,” Dirk Steffen, from the Denmark-based Risk Intelligence firm, told AFP, referring to the later attack.
The Nigerian Navy has commenced investigation into the incident. This is the second incident that occurred on the same day in the region.
Ian Millan, COO of maritime intelligence firm Dryad Maritime, said: “Kidnap of crew for ransom off the Niger Delta continues with the criminals growing in confidence and operating with impunity as they take crew members from ships in the region from under the noses of naval forces who have neither the resources nor the capability to routinely deter the criminals’ actions outside of their territorial waters.”
CMA CGM emphasized that it does not own the Turquoise, and provided the following statement from Dioryx: “Dioryx  Maritime Corporation (Dioryx) confirm that their managed vessel CMA CGM TURQUOISE was attacked by pirates off the coast of Nigeria at position 04 08.01’N 005 23.05’E on April 11 at 19:56 hours UTC. We immediately mobilized our Crisis Response Team (CRT) which continuously tried to re-establish contact with the Master and crew.”

The statement says: “The CRT was also in constant communication with the vessel’s Flag Administration and all the Maritime Rescue Centres as well as the local state authorities. Simultaneously, a line of communication and cooperation was established with the charterers CMA CGM who rendered their full support and assistance. The families of the crew members were informed and are being kept continuously posted.”