Vertical Oscillation of Sea Surface is known as tide. At most places it occurs twice daily. The tide rises until it reaches a maximum height called the High Water and then falls to a minimum level called the low water.

The interval between the High Water & Low Water times is called Duration of Tide.

The difference in their respective heights is called the Range of Tide.

The period at High water & low water during which there is no sensible change of level is called “Stand” or “Slack Water”.

Equilibrium Theory of tides: Newton proposed the first explanation for semidiurnal tides with his equilibrium model according to which:

Shortcomings of the Equilibrium Model :

Effect of Changes in distances of Sun & Moon

The Effect of Shallow Water 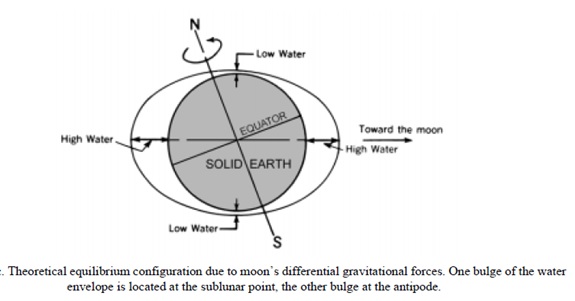