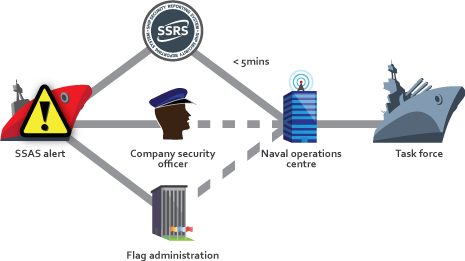 The ship security alert system is provided to a ship for the purpose of transmitting a security alert to the shore to indicate to a competent authority that the security of the ship is under threat or has been compromised. It comprises a minimum of two activation points, one of which is on the navigation bridge. These initiate the transmission of a ship security alert. The system is intended to allow a covert activation to be made which alerts the competent authority ashore and does not raise an alarm on board ship nor alert other ships.

The SSAS is a one-way, ship-to-shore alarm that originates a silent and discrete security alert aboard ship as soon as the security of the vessel is under threat or compromised. As of 2004, all commercial vessels above 500 gross tonnages (GT) are required by the International Ship and Port Security Code (ISPS) to have an operational SSAS installed.

Ships to be provided with a SSAS:

According to the international requirements regarding the security of ships and of port facilities (SOLAS XI-2, regulation 6) ships must be provided with a SSAS as follows