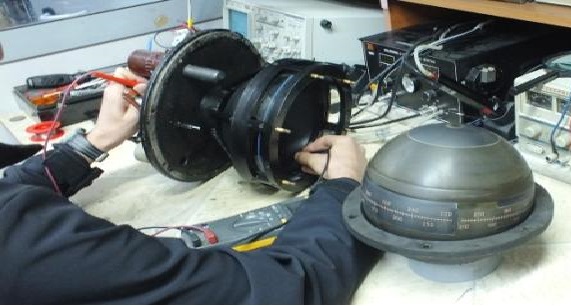 Errors of gyro compass are as follows:

An error existing between the indicated heading on the master compass and the heading produced by any remote repeater is a transmission error. Transmission errors are kept to a minimum by the use of multispeed pulse transmission.

Variable compass errors can effectively be classified into two groups.

The magnitude of each error can be reduced to some extent as shown in the following text.

The gyrocompass is made to settle on the meridian under the influence of weights. Thus it will also be caused to shift due to other forces acting upon those weights. When a vessel rolls, the compass is swung like a pendulum causing a twisting motion that tends to move the plane of the sensitive element towards the plane of the swing. For a simple explanation of the error consider the surge of mercury caused in both the north and south reservoirs by a vessel rolling. If the ship is steaming due north or south, no redistribution of mercury occurs due to roll and there will be no error.

But with a ship steaming due east or west, maximum lateral acceleration occurs in the north/south direction causing precession of the compass. However, rolls to port and starboard are equal, producing equivalent easterly and westerly precession. The resulting mean-error is therefore zero. If the ship is on an inter cardinal course the force exerted by the mercury (or pendulum) must be resolved into north/south and east/west components .

The result of the combined forces is that precession of the compass occurs under the influence of an effective anticlockwise torque. Damping the pendulum system can dramatically reduce rolling error. In a top-heavy gyrocompass, this is achieved by restricting the flow of mercury between the two pots. The damping delay introduced needs to be shorter than the damping period of the compass and much greater than the period of roll of the vessel. Both of these conditions are easily achieved.

Electrically-controlled compasses are roll-damped by the use of a viscous fluid damping the gravity pendulum. Such a fluid is identified by a manufacturer’s code and a viscosity number.For example, in the code number 100/10, 100 refers to the manufacturer and 10 the viscosity. A higher second number indicates a more viscous silicon fluid. One viscous fluid should never be substituted for another bearing a different code number. Additionally since roll error is caused by lateral acceleration, mounting the gyrocompass low in the vessel and as close as possible to the centre of roll will reduce this error still further.

This error occurs whenever the ship is subject to rapid changes of speed or heading. Because of its pendulous nature, the compass gravity control moves away from the centre of gravity whenever the vessel changes speed or alters course. Torque’s produced about the horizontal and vertical axis by manoeuvring cause the gyro mechanism to precess in both azimuth and tilt. If the ship is steaming due north and rapidly reducing speed, mercury will continue to flow into the north pot, or the gravity pendulum continues to swing, making the gyro spin axis north heavy and thus causing a precession in azimuth.

Latitude error is a constant error, the magnitude of which is directly proportional to the earth’s rotation at any given latitude. It is, therefore, present even when the ship is stationary. As has previously been stated, a gyrocompass will always settle close to the meridian with an error in tilt. To maintain the gyro pointing north it must be precessed at an angular rate varying with latitude. At the equator the earth’s linear speed of rotation is about 900 knots and rotation from west to east causes a fixed point to effectively move at  900 × cos (latitude) knots in an easterly direction. For any latitude (λ) the rate of earth spin is  ω = 15° h–1. This may be resolved into two components, one about the true vertical at a given latitude (ω sin λ) and the other about the north/south earth surface horizontal at a given latitude (ω cos λ) as illustrated in Figure: