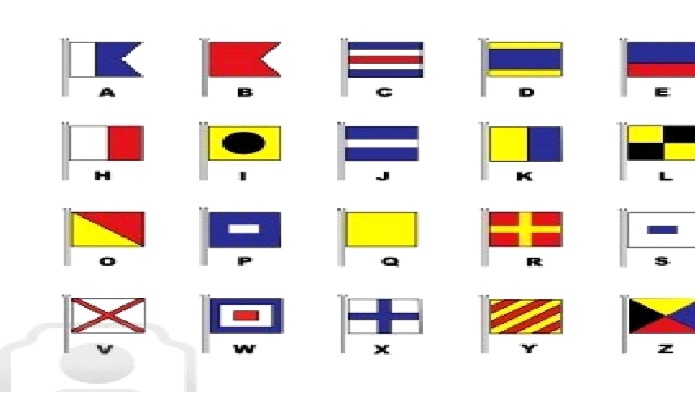 When more than one ship traveled together it was often important to communicate with each other without getting close enough to talk. Flags were again useful for this. Different colored and shaped flags could have different meanings.

One flag might mean “stop”, another “turn south”, and another “man overboard.” As long as the captains of each ship agreed upon what each signal would mean, they could communicate for as far as the flags could be seen.

At night and in bad weather the flags were replaced with lights or signal guns. However, they were limited to signals that could be anticipated in advance.

Before radio communication ships at sea had to rely upon visual signals until they got close enough to shout to one another. For that reason sailors have used visual signals since ancient times. The most common form of communication was a national flag. Even today, ships identify themselves by flying their national flag. This was particularly important during war so that ships could tell if an approaching vessel was a friend or enemy.

As the number of ships on the oceans increased, merchant ships found they needed to communicate with each other as well. The use of signal flags by ships from all over the world began in the 1800s and continues to the present. The modern International Code of Signals consists of 40 letter, numeral, and special purpose flags. Although modern ships have radar, GPS, and radio communications, merchant as well as military vessels are required to carry signal flags and use the International Code of Signals as they travel the world’s oceans.