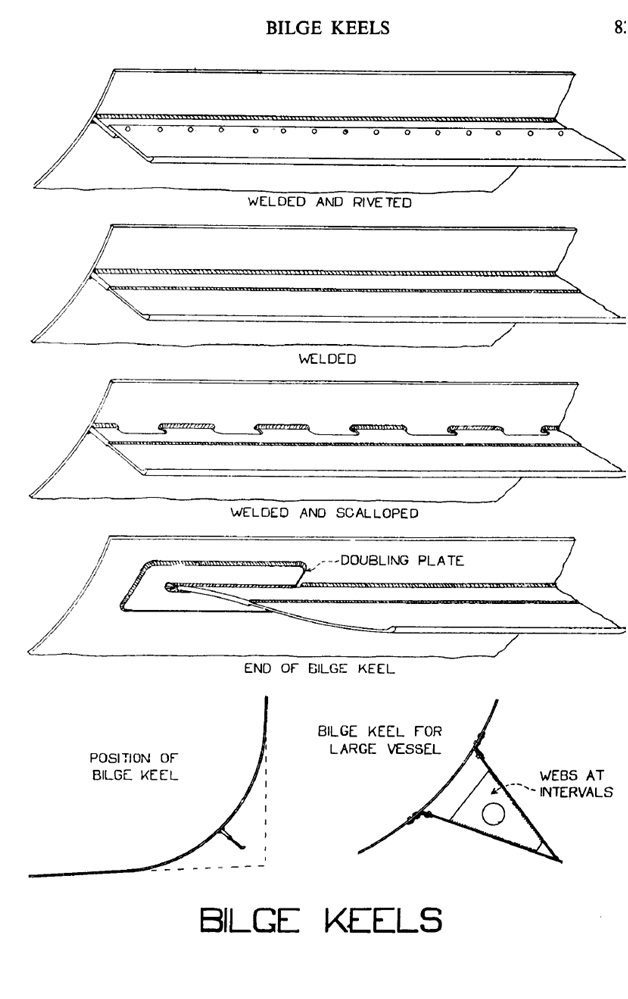 Bilge keels are intended to resist rolling. Their effects are complex, but may be summarised as follows:-

(a) Direct resistance between   bilge keel and water has a comparatively weak effect.

(b) They slightly increase the ship’s period of roll.

(c) They upset the transverse streamlines of the ship’s hull and thus set up eddy-currents and increase the ‘wave-making resistance’.

(d) They increase water pressure over a large area of the ship’s hull and this pressure acts in such a direction as to damp the rolling.

You may also know construction of bilge keel :

Bilge keels are sometimes ripped off, however carefully  they are positioned, if the ship touches the ground.

In welded ships, the bilge keels are usually attached to a continuous flat bar, welded to the shell plating. The outer joint may then be riveted, or lightly welded, so that it will part before the connection to the hull. Alternatively, the keel may be attached to the hull by intermittent welds, and is often scalloped throughout its length, so that the welds will part comparatively easily and will leave the hull undamaged. ,In large ships, where the bilge keels are very deep, they may be constructed as shown in the sketch. Here, again, the outer connection is made less strong than that to the shell plating.