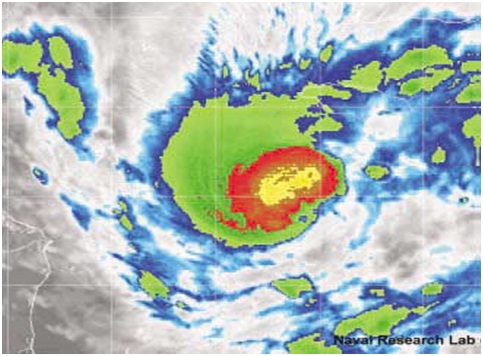 Tropical cyclones in which the maximum sustained surface wind speed (1-minute mean) is greater than or equal to 64 knots. These systems are also known as Typhoons in the Western Pacific and Tropical Cyclones in the Indian Ocean and Southwestern Pacific. Satellite imagery of a 70 knot hurricane.

Hurricanes are further categorized according to the strength of their winds using the Saffir-Simpson Hurricane Scale (SSHS).

A Category 1 storm has the lowest wind speeds, while a Category 5 has the highest. These are relative terms because lower category storms can sometimes inflict greater damage than higher category storms, depending on angle of approach, location, and many other aspects particular to each system. Even tropical storms can produce significant damage & loss of life, mainly due to floods. 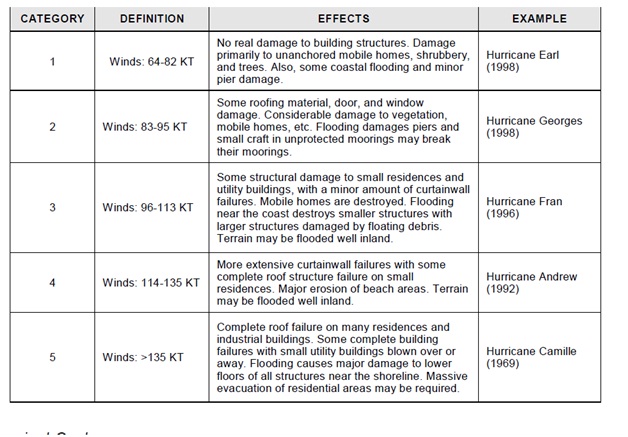 A hurricane’s speed and path are dependent upon two factors.

First is the environmental steering that it encounters while the second is the tropical cyclones own internal influences and secondary steering influences. Typically, a hurricane’s forward speed averages around 13-17 KT.

However, some hurricanes stall, while others, normally during or after re-curvature, can accelerate to more than 50 KT. Hurricane Hazel (1954) hit North Carolina on the morning of 15 October. Fourteen hours later, Hazel reached Toronto, Canada where it resulted in 80 deaths. Some hurricanes follow a fairly straight course, while others loop and wobble along their path. The key to understanding where a tropical cyclone will move lies in completely understanding the steering environment in which that tropical cyclone is found.

You may also know about eyeball :

The innermost convective ring of thunderstorms that surrounds the eye of a hurricane is known as the eye wall. This region is home to the most intense winds and fiercest rains within a tropical cyclone and has a typical width of approximately 10-15 NM. Additionally, it is the most significant contributor in the vertical transport of warm moist air from the lower levels of the storm into the middle and upper levels of the troposphere over a tropical cyclone. This is a fact that agrees with observations throughout the North Atlantic basin where eyes and eye walls are generally observed only in systems with winds of strong tropical storm force or greater.

Changes in the structure of the eye and eyewall can cause changes in surface pressure and wind speed in a tropical cyclone. The eye can grow or shrink in size, and double (concentric) eye walls can form, dissipate, and redevelop. All of these factors play a significant role in short-term influences of hurricane intensity.