Cargoes are mainly of two kinds

Hygroscopic cargoes cause ship’s sweat by virtue of changes in temperature, particularly when passing from warm areas to cooler conditions. More prevalent with sudden falls in outside temperature.

Highly critical (eg. tropical produce en route to U.K.). Ventilation should be as vigorous as possible during the early stages but eventually the outside dew paint will be too low.   This is most difficult voyage situation in which to arrange satisfactory ventilation

Temperature changes in the cargo need not be more than one or two degrees a day to activate sweat, irrespective of larger outside temperature fluctuations. When passing from cold to warm region it may be advisable to seal off ventilators in order to avoid problems of sweat which may arise. 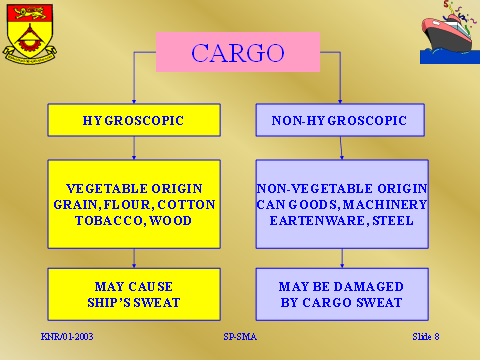