Bearings taken may be:

In any case the bearing must be converted to true before laying it off on the chart. 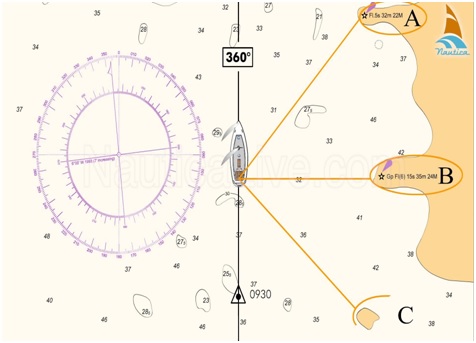 Each position line (LOP) should be identified by a single arrow at the end of the line away from the object observed. When position lines intercept at (or nearly at) a point, that point should be encircled and the time of the fix noted alongside.

When position lines fail to intercept at a point and a “cocked hat” results, it may be due to any of the following:

Ranges of Two or More Points

This is the preferred method when fixing the position by radar observations. Ranges taken from the radar are generally more accurate than radar bearings. Avoiding the steps necessary to convert relative or compass bearings to true also reduces the chance of error.

Ranges must be taken off the adjacent latitude scale and the relevant arc plotted on the chart using compasses. Both ends of the arcs should be marked with a single arrow, the point of intersection circled, and the time of the fix written alongside.
Selection of objects for ranges is as important as it is with bearings, and any cocked hat should be treated in much the same way.

When only one suitable object is available the position may be fixed with a single bearing of that object combined with its range. Although the range would usually be measured by radar it is still preferable to obtain the bearing visually. The bearing can usually be taken more accurately by visual means.

This method may be used providing :

Under some circumstances, such as low visibility, only one line of position can be obtained at a time. In this event, a line of position obtained at an earlier time may be advanced to the time of the later LOP. These two LOPs should not be parallel to each other; remember that the optimal angular spread is 90°. The position obtained is termed a running fix because the ship has “run” a certain distance during the time interval between the two LOPs. 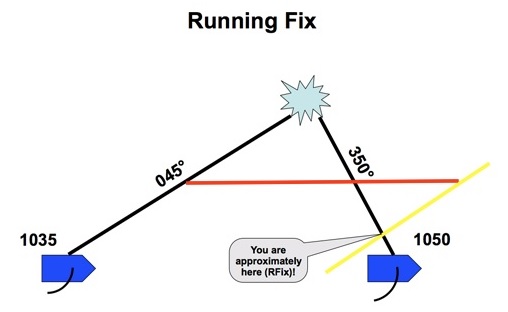 It is more commonly used when only one object is available for bearings and there is no means of measuring the range. In this case there is a planned delay between bearings so that the change in bearing will provide an acceptable angle of cut.