Inospheric and  Tropospheric delays of signals.

The ionosphere is that part of the upper atmosphere where free electrons occur in sufficient density to have an appreciable influence on the propagation of radio frequency electromagnetic waves.

The ionosphere introduces a variable time delay in the propagation of signals from the satellite to the receiver, which affects positioning.

All satellites contain atomic clocks that control all onboard timing operations, including broadcast signal generation. Although, these clocks are highly stable still they lack of perfect synchronization between the timing of the satellite broadcast signals and GPS system time. Satellite clock correction terms  and time of clock  , account for this lack of synchronization. These will lead to inaccuracy in time measurement

Same as above these are eliminated by using an extra satellite equation.

Deviation  of satellite from their predicted orbit.

Errors in the receiver’s measurement of range caused by receiver clock error, thermal noise, software accuracy. These are small and are caused due to internal noise computational error etc

GPS multipath is caused by the reception of signals arrived not only directly from satellites, but also reflected or diffracted from the local objects. Multipath results in an error in  pseudo range measurements and thus affects the positioning accuracy, since the multipath signal takes a longer path than the direct signal.

Multipath results when the direct path to your receiver is blocked (by  your body,  your house,  roof,  trees,  mountains,  buildings,  etc) and the signal from the satellite is REFLECTED by some object.  The reflecting surface may be:  buildings,  mountains,  the ground,  or any object that happens to be a radio reflector at 1.6Ghz.

So we can conclude that multipath error is Caused due to poor sitting on the receiver antenna. 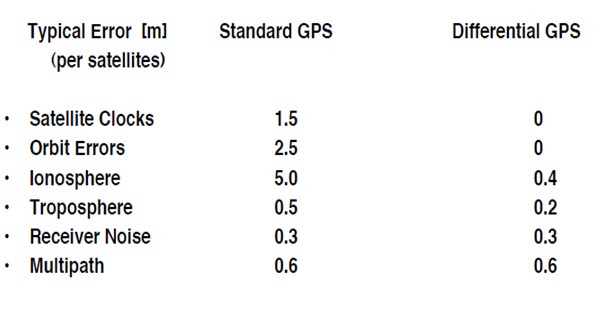