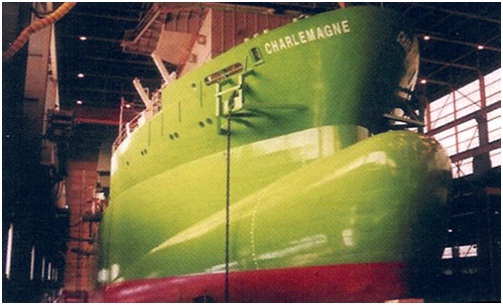 The bulbous bow was originated in the bow ram , a structure of military nature utilized in war ships on the end of the XIXth century, beginning of the XXth century.

The bulbous bow, by changing the entrance angles of the waterlines and the volume distribution, represents an effective mean of reducing the wave resistance.

– Generally at low speeds the effect of the bulb is negative. When the Froude Number (FN) increases, its effect becomes positive and increases up to a maximum value.

– From this point upwards, when the FN tends to the infinity, the effect of the bulb tends to zero.

Advantages and disadvantage of bulbous bow :

The bulbous bow has several important advantages and does not present relevant disadvantages :